This year is my second year at Build. Most announcement during Build are given on Day 1. This blog post is a summary of announcement that I heard of during my sessions.

The sessions I followed on day 1 are:

Information about the keynote and the announcements made their I have already shared in the following blog post:

Build 2017 announcements that effect your work

DevOps for every Team

DevOps was one of the buzz words of Build 2017. At the keynote every attendee got a folder regarding the DevOps sessions. This session was not a real DevOps sessions but showed more the capabilities Continuous Integration / Continuous Delivery options within Visual Studio Team Services. Most of the functionalities for this are build completely within the Azure Portal itself.

Key facts from this session were:

The Asp.Net Core 2.0 sessions was a really good and funny session from Scott Hanselman and Daniel Roth about the announced preview of Asp.Net Core 2.0. Within this session they showed the new capabilities and possibilities of .Net Core 2.0. Executable can be downloaded from the following place:

Note: Installation Preview 3 of Visual Studio 2017 can be done side by side your production version.

The session was about the Continuous Delivery options for Microsoft Azure. Options that were shown are the default options that are within Visual Studio 2017, command line and VSTS. The other features and announcements were more summarized and described shortly below. 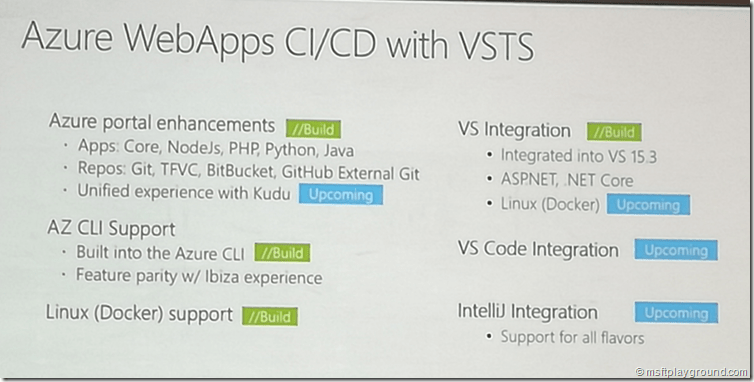 Besides the above announcement Microsoft is also focusing on Container DevOps and announced a lot of things as you can see in the below picture. 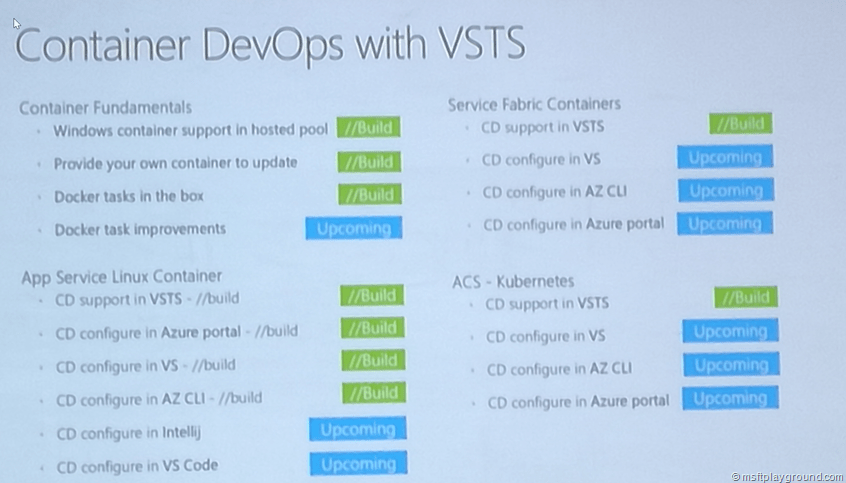 Another great announcement that will be coming soon was Pipeline as Code this basically is a definition file of your release pipeline based on YALM.

During this session new features and roadmap information was given about everything about Azure Compute divided into three sections: Infrastructure, Containers and Platform, were mainly two of them were very important to my opinion.

A lot of new IaaS sizes were announced were two of them were special. The Dv3 en Ev3 were discussed and shown especially because they support nested virtualization. Nested virtualization is the virtualization of machines within a virtual machines. Besides that Corey Sanders gave a demonstration of Azure PowerShell within the Azure Portal that is coming soon and is in preview. The best feature of Azure PowerShell within the Azure Portal was the ability to browse your Azure subscriptions and resources in a file based format using the “dir” and “cd” commands. If your would like to sign up for the preview go to:

Another announcement was a new service called: “Instance Metadata Service” that runs on the virtual machines within Azure that is a rest Api on: https://169.254.169.254 and shows information of the machine for example maintenance windows and scheduled reboots.

Last but not least they announced a feature that Seals azure services as a sealed app in other to distribute  them and keep management over the applications that is called Azure Managed Applications (should be available today).